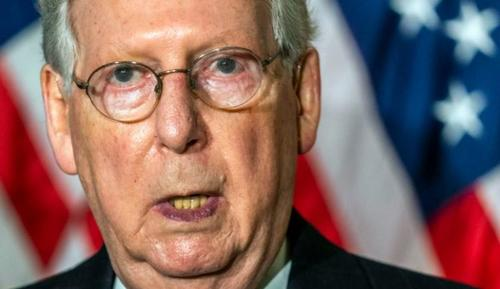 the GOP establishment has turned full anti-Trump: shortly after the McConnell report, House Republican Conference Chair Liz Cheney, the No. 3 Republican in the House, announced Tuesday that she plans to vote to impeach President Trump for inciting a violent mob at the Capitol last week.

“On January 6, 2021 a violent mob attacked the United States Capitol to obstruct the process of our democracy and stop the counting of presidential electoral votes,” Cheney, of Wyoming, said in a statement. “The President of the United States summoned this mob, assembled the mob, and lit the flame of this attack. Everything that followed was his doing.”

Cheney: I Will Vote To Impeach The President

Washington - Wyoming Congresswoman and House Republican Conference Chair Liz Cheney (R-WY) released the following statement ahead of votes in the House this week:

“On January 6, 2021 a violent mob attacked the United States Capitol to obstruct the process of our democracy and stop the counting of presidential electoral votes. This insurrection caused injury, death and destruction in the most sacred space in our Republic.

“Much more will become clear in coming days and weeks, but what we know now is enough. The President of the United States summoned this mob, assembled the mob, and lit the flame of this attack. Everything that followed was his doing. None of this would have happened without the President. The President could have immediately and forcefully intervened to stop the violence. He did not. There has never been a greater betrayal by a President of the United States of his office and his oath to the Constitution.

“I will vote to impeach the President.”

🚨 Liz Cheney: "I will vote to impeach the President." pic.twitter.com/EzmKJaj9av

Earlier on Tuesday, another Republican representative, New York’s John Katko, has also said he would back Trump’s impeachment.

McConnell believes impeachment will make it easier to “purge [Trump] from the party” ahead of a Wednesday House vote to formally charge Trump with inciting violence against the country.

Meanwhile, Trump ally and minority leader Kevin McCarthy of California has asked other Republicans whether he should call for Trump to resign in the aftermath of the events at the Capitol last week. McCarthy and others have decided not to formally lobby Republicans to vote against the impeachment. He is said to have reached out to Nancy Pelosi to gauge interest in pursing a censure vote, though Pelosi has reportedly ruled it out.

McConnell has indicated that he “wants to see the specific article of impeachment that the House is set to approve on Wednesday,” the Times wrote. President-elect Biden even spoke to McConnell on Tuesday to ask about the possibility of “a dual track that would allow the Senate to confirm Mr. Biden’s cabinet nominees and hold a Senate trial at the same time”.

The article is expected to draw support from “as many as a dozen” Republicans.

McConnell was outspoken after the Senate reconvened on Wednesday last week, stating “This failed attempt to obstruct the Congress, this failed insurrection, only underscores how crucial the task before us is for our Republic. Our nation was founded precisely so that the free choice of the American people is what shapes our self-government and determines the destiny of our nation.”

Taken together, McConnell and McCarthy’s respective stances represent a shift in sentiment and a break from Trump within the Republican party heading into the last days of the President’s term.

Trump, on the other hand, has remained steadfast, stating on Tuesday that his remarks to his supporters were “totally appropriate,” and that the idea of impeachment was “causing tremendous anger”.